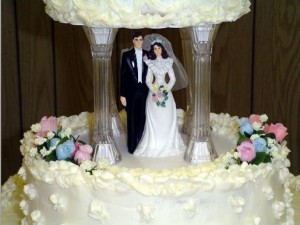 A wedding cake is a traditional luscious desert shared with the guest in a wedding feast after the ceremonial rite. It is also considered as the centerpiece of the wedding banquet. It is usually large, multi-layered, and with heavy icings as decoration. Miniature figurines that represent the bride and groom more often put on top of the cake.

The tiered spire of a famous medieval church called St. Bride’s in London,England gave the inspiration for the layered design of our wedding cakes.

The wedding cake tradition originated back during the medieval era. It is required of for each one of the wedding guest to bring a petite cake. These cakes would be stacked up and arranged in layers. These stacks of cakes would ultimately become as one cake.

Our contemporary wedding cake is said to evolve from this traditional practice. In most all celebrations all over the world, sweets or deserts are part of any feast. It is evident in records of the ancient Roman that during wedding banquets sweets are being given away.

By tradition, it is a practice that this luscious desert was thrown, instead of being eaten, on the bride. As this is believed to surround lots of fertility blessings for the newly weds. Fortunately, this odd tradition changed, and the cake is now eaten as noticed during the couple’s romantic sharing of the first slice. This stands for the formation of a new family.

Another custom in the ancient times is that the new wife serves the whole of the cake to the family of the groom. This symbolizes the transfer of the bride’s domestic labor to her husband’s family.

To add up to the antique custom of the olden time is the observance of the practice that the bridesmaid place a slice of wedding cake underneath her pillow while she sleeps on it, for reasons that her would-be-husband will appear in her dream. Portion of the cake can also be stock up and on the couple’s first wedding anniversary or on the occasion of the christening of their firstborn child.

These days people don’t see the connection of the wedding cake with having plenty of offspring. But instead the wedding cake has turn out to be the first meal shared by the bride and groom. Today’s couples do the slicing before everyone and they feed each other. Supports that both of them will provide each other for the rest of their lives symbolize the cake cutting ceremony.

Here are among some of the fancy ideas that could be used in a wedding cake as a sign of fertility:

· White and creamy cake is a reminder of an Italian culture, while a fruit cake if more of a Greek practice.

· A memorable piece of cake topper that is very significant in your life.

· Fondant icing, it has very smooth surface that resembles simplicity and elegance.

· Pick a favorite cake in lieu of the traditional white wedding cakes.

Wedding cakes are often viewed with its symbolic value than the enjoyment and pleasure of eating it. Today’s cakes are no more the plain white ones with boring frostings; instead these cakes can be visual as well as a culinary showpiece. Lists of interesting cake icing are described to suit the couple’s palate.

Buttercream is a soft and velvety butter-based frosting that can cover the whole cake representing a traditional appearance. It comes in different flavors like vanilla, chocolate, lemon, espresso, coconut, or hazelnut. A buttercream-iced cake is required to be kept in a cold place.

Royal Icing is used to make the other cake accessories such as the flowers and the other edible cake decorations. It becomes hard when it dried up.
Marzipan is a sugary, soft paste prepared from ground almonds, sugar and egg whites. It can be used beneath other icings or as a finishing frosting itself. Colors can be added on it and shaped into flowers or other decorative shapes, as a savory alternative to gum paste or sugar.

The wedding cake we are familiar with today had its beginning several hundred years ago, in a confection that celebrated the wedding ceremony of Queen Victoria’s daughter in 1859. The stacked and tiered like that of a hat boxes. Wedding cake developed from there. As time passed by, a lot of enhancement had been made which contributed to what it is today. Wedding cakes these days are to a great extent more creative. It is more of a personal expression of technique and come in an assortment of figures, palate and decorations. 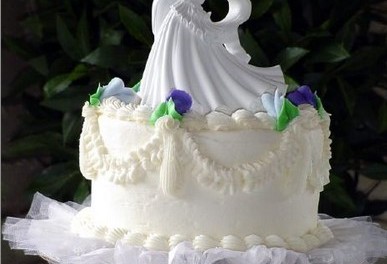 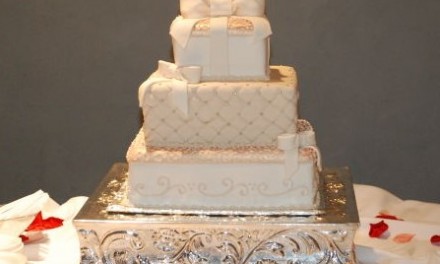 How to buy wedding cakes 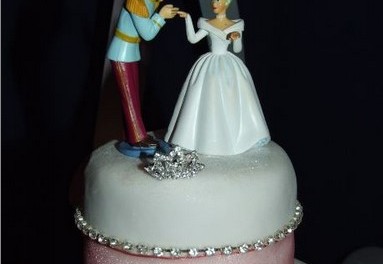 Things You Should Know About Wedding Cake Toppers 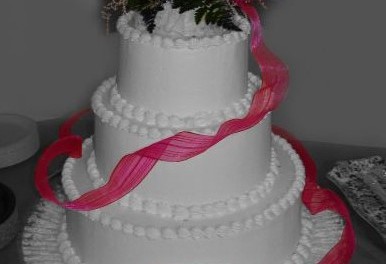 Some Tips When Buying Wedding Cakes