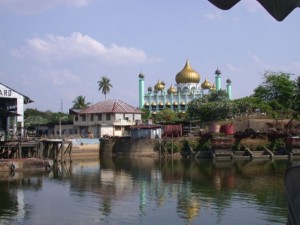 I know the title of this piece seems snarky and even somewhat mean, but read on and you’ll understand why after you read it.

Now if you know anything about Islamic weddings or wedding in the Arabic world, you know that they have many customs that set them apart from the rest of the world.
One of these customs that seems really strange and dangerous to me is the custom of shooting guns into the air to celebrate a wedding.
The guns being shot off these days are usually AK-47 automatic rifles, the most common gun in the world, and they’re firing live ammunition.
That’s right live ammunition.
If you know anything about physics, you know that if you fire a projectile into the air, it will eventually run out of momentum and fall back to earth.
If it is shot straight up into the air, it will fall back in a more or less straight trajectory to an area close to where it was originally fired.
Am I alone in thinking that firing guns straight up into the air around large crowds of people is a fairly insane practice?
Even if you’re not firing straight up into the air, if you’re firing your weapon at a shallow angle, that means it will land close by when it falls back to earth.
So what happens if you’re doing it inside a city or some other densely populated place?
Well, unfortunately, tragedy ensues.

Here are a few of the hundreds of cases of accidental death or injury caused by firing weapons at weddings around the world.

At a wedding in Serbia in 2003, gunfire from a wedding accidentally shot down a two-seater light plane that had strayed over the wedding site.
In the United Arab Emirates just this past February 45 wedding revelers were killed by stray bullets!
A two-year girl was shot in her head by a stray bullet as she sat in her mother’s lap at another Islamic wedding.
And in India, a 10-year-old girl was killed by stray gunfire at a wedding.

In my research, I found wedding deaths caused by gunfire in Macedonia, Namibia, Turkey, and Karachi, Pakistan, and the list goes on and on.

But perhaps the most horrendous loss of life occurred in Afghanistan, where wedding revelers were firing their guns into the air at an isolated location, which attracted the attention of U.S. military ground forces that called in an air strike, thinking that Taliban fighters were engaged in a firefight.
Fighters soon arrived on the scene and bombed the wedding party, killing 120 people, which prompting international cries of outrage at this senseless loss of life.

If there is one lesson to be learned from all of these stories, it is that, culture norms aside, the practice of firing live ammunition into the air at weddings and other celebrations must cease.