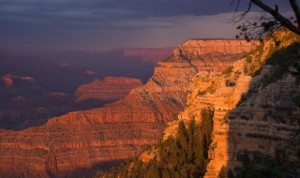 Although the Grand Canyon has always been a popular wedding and honeymoon destination, (around 130 couples get married there every year, as they have for decades), there’s never been a better time to get married there than right now.

One reason for that is the newly constructed Grand Canyon Skywalk, which offers couples the opportunity to get married hanging in space some 4000 feet above the floor of the Canyon, which is visible beneath their feet.
It’s certainly not for the faint of heart, or for anyone who suffers from a fear of heights, but it would provide you with a unique and unforgettable setting for your nuptials.
But of course, that’s only one of the many spectacular vistas that the Grand Canyon and its environs have to offer.

One popular setting for weddings is the South Rim’s Shoshone Point.
While it is available for weddings for most of the year, it’s a good idea to book ahead to be sure that you can secure the date you want.

Or, if you can afford it, you can have yourself, your fiancée and your Best Man and Maid or Honor, and the minister, of course, flown down to the canyon floor via helicopter.
You’ll land at the helipad on the canyon floor and be taken via horse-drawn wagon to the Grand Canyon West Ranch for the ceremony.
Taking the helicopter to the bottom of the canyon will cost you anywhere from $1,500 to $2,500 for four passengers and a minister or other officiant, with a charge of $300 for each additional guest.

Once you’ve decided on a spectacular Grand Canyon wedding, here are a few things to keep in mind to ensure that your nuptials go off without a hitch.
Be conscious of the monsoon season.
It runs from June 15th through September 15th and features some quite spectacular rainstorms.
In fact, it rained so much during the 2008 monsoon season that the village at the bottom of the canyon was flooded out.
You’ll also need a wedding license from the Clark County Clerk’s Office.
It will cost you $55 and it remains valid for one year after it’s issued.