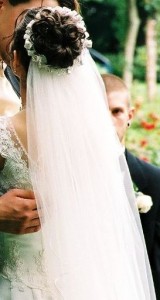 The veil dates back to the ancient Greeks and Romans. They were wary of evil spirits and demons, and bright colors were believed to scare off these unwanted spirits. Occasionally, a Roman bride was completely covered in red veils to protect her from evil spirits. Others believe wearing the veil stems from the time of arranged marriages. The father of the bride may have feared the groom would not want to marry his daughter if he found her unpleasant to look upon, so the bride would be heavily veiled and she would not be revealed to the groom until after the ceremony.

Many believe the tradition of the ‘unveiling’ stems from Biblical story of Jacob and his two wives. Jacob’s father-in-law, Laban, tricked him into marrying Leah instead of his true love, Rachel. Leah was heavily veiled and Jacob did not realize he had married the wrong woman until after the ceremony. Thus the Jewish tradition of Bedeken was born, where the groom lowers the veil before the ceremony and raises it prior to the kiss.

The veil became popular in England during the 1800’s and signified modesty and chastity. In the Christian tradition, the veil is lowered by the father before the processional and is raised by the groom prior to the kiss.

In some Eastern ceremonies, the bride is veiled throughout the entire ceremony and is not unveiled until after it is over.

The wedding veil has evolved over the centuries, and has signified youth, virginity and modesty. Roman brides were married in swathes of brilliant red or yellow, while Viking queens wore metal skullcaps. Many Japanese brides still wear the traditional tsuno-kakushi, a white hood that supposedly hides the horns of jealousy. Veils made of lace were made popular in the United States by Nelly Curtis, the adopted daughter of George Washington. Legend has it that Major Lawrence Lewis, her father’s aid, saw Nelly standing behind a filmy lace curtain and he was so taken by her beauty that he asked for her hand in marriage. She then wore a lace veil on her wedding day in order to preserve the effect for her groom.

A veil is NOT just a veil!