In Your Honor: The Maid Of Honor 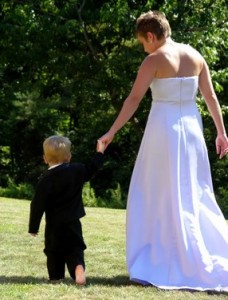 The task of selecting the Maid of Honor is one of the most difficult decisions that has to be made by the bride. The complexity is due to the fact that the duties of the Maid are normally not defined and typically poorly addressed. Every bride actually has her own opinion on what how a Maid of Honor should act. However, communicating these ideas are difficult.

The Main of Honor is commonly perceived as a ceremonial figure that walks behind the bride down the aisle before the bridesmaids. In another light, the Maid of Honor can act, as the one that will help calm a nervous bride, helps in sending out invitations, making sure the registry is properly sent, gives tips on the how the wedding gown should look like and acts as the manager of the bridesmaids.

The Maid of Honor can also host the bridal shower or the bachelorette party. To sum it up, the Maid of Honor is the bride’s closest friend or ally in preparing for the wedding and will always be there during times of need and frustration.

The following are certain etiquette in choosing a Maid of Honor to help minimize stress and maximize pleasure.

The Maid of Honor does not have to be a family member.

It is not a requirement to make a sister or a female cousin the Maid of Honor. A best friend who has been there through thick and thin will likely deserve this distinction.

The bride should instruct the Maid of Honor on her responsibilities.

Brides should communicate what they expect from the Maid of Honor such as making a speech during the reception. Open communication between the two should happen frequently.

Choosing more than one Maid of Honor is not illegal.

The bride should make sure that Maids of Honor have different responsibilities in order to avoid jealousy between them.

The Maid of Honor needs to attend all-wedding activities such as showers and parties for the bride. She will also be tasked to plan and be financially responsible for any bachelorette party and assist in organizing invitations and always be open for favors.

The Maid of Honor’s emotional support is one her integral responsibilities. As the so-called “maid” she is expected to give her full attention to the bride during the wedding day. She should also make sure that the bride is looking almost perfect before they troop down the aisle and constantly check on her condition during the middle and end of the ceremonies up until the start of the reception.

Upon choosing the Maid of Honor, she should be treated out by the bride to a nice dinner or spa to make her feel she is a very important part of the wedding. The Maid of Honor could have a dress designed differently from the other bridesmaids to make her stand out in the entourage.

Etiquette also dictates that the Maid of Honor will wear the groom’s ring on her finger in the absence of a ring bearer. She is also part of the group that will decorate the bridal car and help the bride in wearing the bridal dress.

A wedding ceremony adhered to certain etiquette to make the occasion flow seamlessly and orderly.

– In a semi-private wedding, groomsmen and bridesmaids are given certain responsibilities in helping the bride and groom during the wedding day.

– The bridesmaids should be younger than the bride and their dresses should match. Bridesmaid dresses can include more ornaments and should be composed of light and graceful material. Flowers should functions as the chief decoration.

– The wedding dress should be simple but can be attached with small jewels or ornaments. The garland and veil should be the most eye-catching.

– Bridesmaids should stay at the bride’s left side during the actual wedding ceremony. The first bridesmaid should hold the bouquet and gloves.

– Bridesmaids can be positioned from the shortest to the tallest in order to be symmetrical. A bridesmaid and groomsman with similar height can be paired.

– The groomsmen are assigned to guide the clergyman and then show him to the couple. The groomsmen should stand at the groom’s right side during the wedding ceremony.

The Rules For Second Wedding Etiquette