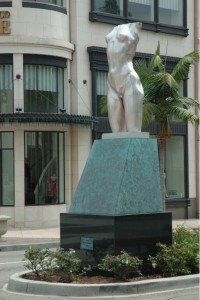 It’s not that unusual for nudists to want to marry in the buff.
After all, they spend much of their time at clothes-optional resorts and nudist gatherings, so why not get married in your favorite outfit?

But what makes this 2003 wedding ceremony so unusual is that it included a whopping total of 29 couples, all totally naked.
This isn’t a joke.
It actually happened in the island nation of Jamaica at the Hedonism III Resort in Runaway Bay, St. Ann. Appropriately enough, the mass nude wedding took place on Valentine’s Day in an hour-long ceremony held on the lawns near the hotel’s nude beach.

The happy couples represented all walks of life and many different professions from heavy equipment operator to advertising executive to welder to kindergarten teacher, and included a Russian, a Native American from the Crow tribe, and a Canadian national.

The Reverend Frank Cervasio from the Universal Life Church of Florida officiated over the joint nuptials as he had for all the nude weddings that have been held at the resort for the past three years.
Around a dozen couples a year were married in the two years preceding this record-breaking nude mass wedding.

Despite the lack of wedding gowns and tuxedos, resort official Zein Nakash was quoted in 2003 as saying, “It really is a beautiful event. Just because they’re naked, it isn’t vulgar. It’s very tasteful and beautiful.”
However, the brides and grooms weren’t totally naked.
Some of brides wore veils or garters, and some of the grooms wore vests, collars, bow ties and top hats.

One bride’s 18-year-old daughter and her boy friend decided to attend the wedding, and will participate in the ceremony, tastefully blindfolded, though most of the groom’s family thought his choice of wedding venues to be decidedly odd.

There was of course, a wedding rehearsal before the blessed event, though in this case it was an “un-dress rehearsal.”

When the happy day dawned and all of the naked couples got hitched without a hitch they celebrated afterward with a giant multi-tiered cake, a champagne fountain, and a bridal arch for taking wedding photos.
All of the celebrants were entertained afterwards (naturally) by a Jamaican steel drum band.

This mass nude wedding stands to this day as one of the most unique and unusual weddings ever staged anywhere.
And just think of the money they saved on wedding gowns and tuxedo rentals.