While in many Western countries such as the United States and Great Britain, June weddings are considered lucky, in Russia, getting married in May is considered extremely unlucky, with a May wedding thought to almost guarantee an unhappy marriage.

As the saying in Russia goes: “Those married in May will always pine.”
And it’s not just May marriages that are considered doomed.
In Russia, any endeavor embarked upon in May will probably fail.
This may be due to the fact that the word for May in Russia “Mai,” has a similar sound to the Russian word Mayatsa, which means to pine or undergo suffering.

There are other ill omens in Russian tradition such as the idea that you must not cross the path of the bride and groom while they are on the way to the wedding Registry Office or the church.
Not only that, you should not cross their paths when they are leaving the church or Registry Office either!
Out in the Russian hinterlands and small villages, it is thought that only witches or those wishing the new couple bad luck will deliberately cross their path. 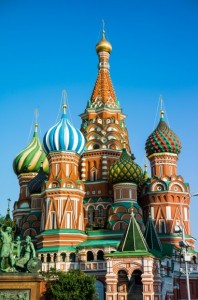 Interestingly, the Russians believe that whichever member of the couple first steps on the carpet inside the Registry Office will be the head of the family.
They have a similar belief about the person who is the first one to cross the threshold of their new home.
Another way that the Russians determine who will be the head of the household is that when the in-laws give the new couple a khleb-sol (a round loaf of bread with a salt shaker inserted in the top; a traditional symbol of good luck since bread and salt both symbolize luck in Russian culture) the bride and groom must each take a bite from the loaf without touching it with their hands.
Whoever takes the bigger bit will run the household.

Wedding rings are the source of another bad-luck superstition.
If the groom should drop the ring while putting it on his bride’s finger that really means bad luck.
Shoes, too, are another source of bad luck.
If a Russian bride should break a heel that is a bad omen for the wedding.
Shoes are also the source of good luck.
A Russian bride will sometimes put a coin under her left heel to bring her luck.

However, it must be the essential darkness of the Russian character that the Russians have so many superstitions about what can cause future bad luck at weddings.