In ancient times, brides were thought to be particularly vulnerable to evil spirits, so in order to protect the bride, her friends were richly dressed in costumes similar to the bride’s and acted as decoys to confuse the evil spirits. 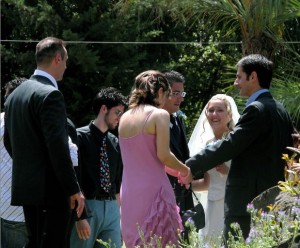 Today, the function of the bridesmaid is to be a support to the bride as well as her confidant and friend.

Have you ever wondered about the purpose of groomsmen?
Legend has it that this came about during ancient times when women were in short supply and a man had to literally kidnap his bride from her village, clan or tribe. The groom-to-be would bring along his ‘best men’ to help fight off angry family members or from competing suitors.

The best man of days-gone-by was responsible for more than the wedding ring. Since there remained a threat of the bride’s family attempting to forcibly gain her return, the best man stayed by the groom’s side throughout the marriage ceremony, protecting the bride and groom from any threats. He also served as a sentry outside the newlyweds’ home.

It is believed to bring good luck to the groom if the best man arranges for the groom to carry a good luck charm in his pocket on his wedding day. It is also considered good luck for the best man to pay the officiant’s fee in an odd sum.

Nowadays, the role of the groomsmen and best man has been confined to the honorary positions.

The Best Man and the Bachelor Party: Here’s A Story Just For the Men only!