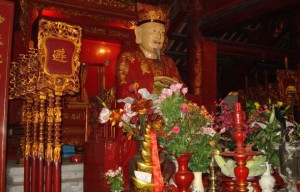 Did you know that in Vietnam, it is usually an astrologer, priest or fortuneteller, not the bride and groom, who sets the date for their wedding?
In a custom unique to Vietnamese culture, before the wedding, the mother of the groom visits her daughter-in-law to bringing with her pink chalk so that the bride may draw a rosy future, and betel nuts, which symbolize respect in the Vietnamese culture.

In kind with other cultures around the world, the groom goes to the bride’s house bringing gifts of clothes, money and jewelry.
However, in Vietnam, the gifts are transported in lacquered leather trunks lined with pink satin.
Because most Vietnamese people practice Mahayana Buddhism, their ceremonies and traditions are of course very different from those practiced by Christians, Jews or Muslims.

For one thing, the traditional Vietnamese bride doesn’t wear a western-style white wedding gown.
Instead, she wears an elaborate Áo dài dress.
These are traditional in Vietnam and are styled after the dresses women wore in the Nguyen Dynasty.
They aren’t white dresses, though.
They are usually pink or red and are sometimes embroidered with elaborate designs.
The Vietnamese bride tops off her Áo dài dress with a Khan dống headdress.
A Vietnamese groom wears a somewhat less elaborate version of the same dress that is frequently blue.

An engagement ceremony precedes a Vietnamese wedding, usually about six months before.
Up until very recently the parents would arrange the wedding, and while the prospective bride and groom were sometimes consulted about their future mates, the final decision always rested with the parents.

In kind with Indian arranged marriages, it was not unusual for a Vietnamese bride and groom to meet for the first time on the day of their engagement, or even on their wedding day.
The tradition of the arranged marriage has faded in the last few decades and now many young Vietnamese marry based on love rather than their parents’ choice of mates.

When the day of the wedding finally rolls around, it is a busy one for the bride and groom as they must participate in an elaborate assortment of ceremonies, including the first ceremony to ask permission to receive the bride, which is followed by a procession to receive the bride at her house, and then there is a procession that brings the bride to the groom’s house.
The bride and groom then serve either wine or tea to their guests.
Finally, the parents will give the new couple advice about marriage and raising a family.
The groom must formally request permission to bring the bride into his house, and must ask his fiancée’s mother for permission to have sex with her!