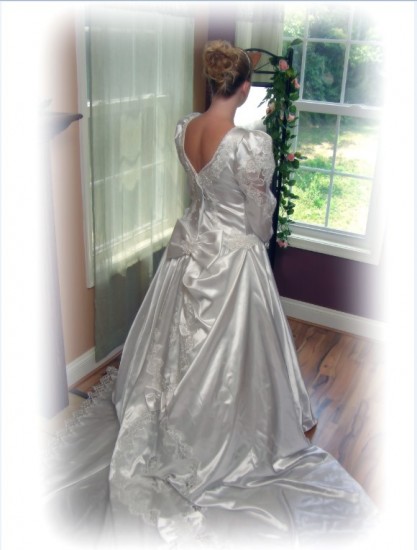 Although there are a number of contenders for the title of ‘World’s Most Expensive Wedding Dress,’ it appears that the winning gown is a collaboration created by jeweler Martin Katz and dressmaker Rene Strauss.

This breathtaking creation boasts a total of 150 carats worth of diamonds laced throughout the fabric.
Katz and Strauss’s little frock is available for a mere 12 million dollars.
Oddly enough, when this fabulous gown made its debut in 2006 at the Ritz-Carlton in Marina Del Ray, California, it was worn by a model wearing a veil that was studded with mere rhinestones.
I would think that if you’ve going to shell out such a fabulous sum for this gown that it would be accompanied by a veil that was equally fabulous, and perhaps accessorized with some diamond-encrusted slippers or pumps?
At these prices, would that be asking too much?

If you’re feeling a bit of a pinch from the world’s recent economic woes and you don’t have an extra $12 million to shell out, you could consider buying a little frock that was given its premiere at the exclusive Burj Al Arab’s Al Falak ballroom in the U.A.E. for a strictly royal and invited V.I.P. crowd.

This wedding dress was whipped up by designer Yumi Katsura, who used silk-satin fabric embellished with zari-embroidery, 1,000 pearls, a green 8.8 carat diamond ensemble a five-carat white gold diamond, which is one of the only two such gems in the world.
And while it’s not the most expensive gown in the world, it is available for 1 billion yen, or $9,419,721.814 dollars.
This is less than Katz and Strauss’s budget-busting creation, but this kind of money is still not pocket change, which is probably why it was shown to a mostly royal crowd first.

On a lesser scale, but still pretty breathtaking in price, let us conclude this survey of the world’s most expensive wedding gowns with a dress from Italian designer Mauro Adami, the lead designer of Domo Adami in Milan, Italy, that is available for a mere $427,584 dollars.
For that price, you’re purchasing an ultra-luxurious white wedding dress fashioned from 40 meters of fabric spun from silk and platinum thread.
To say that this gown is stunningly beautiful is an understatement, but as with anything, beauty has its price.
In this case, Adami’s lovely creation is on sale for more than the price of the average middle-class home in the U.S.