One advantage Star Trek fans (or Trekkers, as they prefer to be called) over other groups who like to dress in costumes from their favorite fictional universes is that Trekkers are so well-established as subculture that it’s really easy to find them, and to get Star Trek costumes from any show in any era, from original Trek to the costumes for Star Trek: Enterprise. 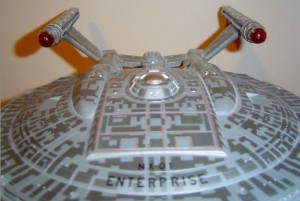 Of course, with the plethora of different Star Trek shows out there, plus a dozen feature films, you could go nuts trying to figure out which set of costumes to wear for your wedding.
If you’re a traditionalist, I’d suggest that you wear original costumes, which include dress uniforms for male guests.
Wearing the minidress uniforms that female Enterprise crew persons wore, might be a bit more problematic for female members of the wedding party, depending upon how they’re built, their body types and so on.

So, when figuring out which era Star Trek costumes to wear in your wedding, be sensitive to how the women will look and try to either pick a look that will be flattering for most of them, or allow them some flexibility in the costume they choose.

There are lots of pretty female costumes from the first three seasons of Star Trek, so why not just let the women pick whichever one of those they like best.
As long as it’s from the Star Trek universe, it will certainly be in the spirit of things.

There are plenty of commercially produced costumes available for every Star Trek show, movie and offshoot, so there’s no problem acquiring the costumes, and if you want to make your own to try holding down costs, you can get patterns for just about every type of uniform from: Roddenberry.com.

Now that you know what to do about the costumes, the question then comes up: what do you feed people at authentic Star Trek wedding?

Fortunately, there are a number of Star Trek cookbooks available, including a nice one called, naturally enough, The Star Trek Cookbook.
It was co-written by Ethan Phillips, the actor who played Neelix on Star Trek Voyager, and it only makes sense that he’d write a cookbook detailing the favorite recipes of all the ST characters since Neelix was the chef on Voyager.

With that cookbook in hand, your only problem remains:
where are you going to get enough Saurian Brandy and Romulan Ale for a whole wedding party full of thirsty and boisterous Trekkers?

When Staging A Skydiving Wedding, You Only Get One Shot At It, So Get It Right the First Time!