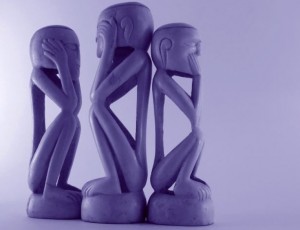 While weddings are a constant in all the world’s cultures, not all weddings are created equal, and many wedding customs may seem very odd to people from other cultures.

In India, a land noted for the extremely varied spiritual beliefs of its inhabitants, some wedding customs are related to a belief in evil spirits.

For instance, at the conclusion of the wedding ceremony, the groom’s brother will scatter flower petals on the heads of the bridal couple to ward off evil spirits.
Another Indian method of driving off malign influences is to hold a coconut over the new couple’s heads while circling them three times.

Food also figures in Moroccan weddings as well.
Moroccan brides bathe in milk before the wedding to purify their bodies.

While in the Philippines, people there employ a unique method for driving off evil spirits.
The bride and everyone in her party all dress in the same color.
That way, it’s harder for any evil spirits present to find the bride and steal her away before the wedding ceremony occurs.

In England, the bells are played as the bride and groom enter the church as a way to drive away the evil spirits. The bells toll again as the newly married couple leaves the church for the same reason.

Many common wedding customs are intended to either create good luck or ward off bad luck.

The English think that Wednesday is the best day of the week on which to marry.
If you marry on Monday, you will have wealth.
Those who marry on Tuesday will have good health.
Oddly enough, Saturday is considered the unluckiest day on which to marry, but it’s also the most popular day of the week for English weddings.
On the other hand, the English think that finding a spider in your wedding dress means good luck in the future.

In Egypt, the women attending the wedding will pinch the bride on her wedding day to give her good luck.
However, the bride’s female relatives make up for this impertinence by cooking for the new couple in the first week of their marriage so that the bride and groom can relax.

Although rice has traditionally been thrown at the bride and groom as they leave the chapel after an American wedding, that custom is gradually being phased out in favor of throwing birdseed and confetti because people found out that the birds that ate the grains of rice sometimes exploded after the rice expanded inside their guts!
The French don’t have a similar problem since they throw wheat at the bride and groom instead of rice.
In the Czech-speaking countries, they throw neither rice nor wheat; instead, they throw peas!

Forget taking your father-in-law to be out for drinks if you live in Fiji.
If you want to impress a Fijian bride’s father, you need to ceremonially present him with a tabua (whale’s tooth), which is a symbol of wealth and status.

If you live in Wales, you don’t need to bother with an engagement ring for your intended either.
Traditionally, Welsh men would carve a wooden spoon for their fiancées, which the girl would wear around her neck as a symbol of her engagement.
The old-fashioned term “spooning” that means to court a woman or go steady is actually derived from this quaint custom.

One of the oddest American courting customs was one known as “bundling,” which originated in the New England region. Dutch and English settlers brought the custom over from the Old Country and it allowed engaged couples to lie in bed together before marriage (fully clothed, of course) as a way of dealing with the long, cold New England winter nights. Brrrr.