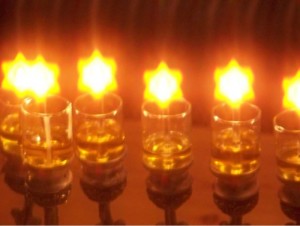 During the week before the Jewish wedding, it is customary for the bride and groom not see each other for the entire week, even during the day.

The traditional Jewish wedding begins with the bride and groom signing the Ketubah, or marriage contract, wherein the couple pledges to support each other both financially and emotionally.
The duties and expectations of their married life are also spelled out in this sacred contract.
After signing the Ketubah, the groom takes off the bride’s veil to ensure that he is marrying the right girl.

During a Jewish wedding, the rabbi, groom and groomsmen all wear a traditional white colored cap.

Interestingly enough, despite the reputation of Jewish women for loving their ornate jewelry, a traditional Jewish wedding band is very simple, boasting no jewels, and no engraved designs.

At some Jewish weddings, a somber, wordless melody is sung as the bride and groom proceed down the aisle toward the specially-built canopy (called a Huppah or Chuppah) under which they will be married while surrounded by the parents of both the bride and the groom as well as their friends and family.

In Jewish weddings the parents of both the bride and the groom escort them down the aisle.
The fathers walk with the groom, the mothers walk with the bride.
Following the exchange of wedding vows, a total of seven blessings are read to the couple by the officiating rabbi. The couple then exchanges rings and circle the wedding canopy.
The new couple is then offered a glass of wine, which signifies the transitory nature of human happiness.
The groom stomps on the glass to joyous cries of “Mazel Tov!”

After this, things really get fun and exciting.
Jewish weddings feature lots of music, singing and dancing.
Jews traditionally do a dance called the Hora at weddings.
At this time, the bride and groom are recognized as the “king and queen of the night.”

The wedding reception might also include a dance where all of the guests circle the bride and sing her praises.

After the dancing, the bride and groom and all of the family and guests are served a huge meal of traditional Jewish dishes such roast potatoes, meats (kosher of course) and vegetables, though in the United States, the kosher wedding feast often consists of things like salmon, roast chicken, vegetables or whatever gourmet foods happen to be trendy at the time.