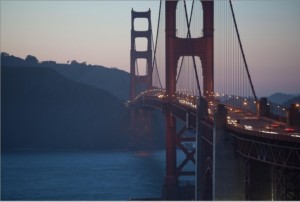 Even though the state of California recently passed Proposition 8, which effectively barred gay marriage, it’s still got many gay-friendly spots, and gorgeous scenery that it’s still almost impossible to discount California as a gay honeymoon destination.

When you think about it, California’s got everything from great beaches, world-famous nightlife and restaurants, the Northern Wine Country, miles of tacky suburban malls, and even rain forest to explore in Northern California.

And what gay couple could live in America without ever visiting San Francisco, one of the gayest cities in the U.S., home of Castro Street, the heroic and tragic Harvey Milk, and so much other tradition near and dear to gay history?

LA has lost none of its luster despite hard times in the California economy and the movie biz, but it’s still one of the most exciting cities in the entire world with amazing club life.
In L.A., it’s practically an embarrassment of riches with all the choices a gay couple can find on a honeymoon trip.

For starters there’s The Abbey, recently voted “L.A.’s best gay bar.”
The interior is luxurious and chic, the crowd is fascinating, and there’s an enticing array of special martinis.

If you’re in the mood for something a little less glitzy, but still very cool, you need to check out Akbar’s.
It’s a friendly place with a trendy, though not snobby crowd, lounging on the African couches.
It’s got a laid-back atmosphere and one of the most interesting juke boxes in town.

If you’re feeling romantic and adventurous, you must go to Here Lounge.
It’s sexy, smooth, and sleek, everything you’d expect from a gay club in L.A.

If you’re tired of glitz and just want a fun night out, check out The Palms, a friendly lesbian bar that’s unpretentious, but comfortable, and has karaoke some nights to add to the festivities.

And you can’t possibly leave L.A. without taking in Jewel’s Catch One, America’s first black gay lesbian disco.
Established in 1972, Jewel’s is a gay landmark, just like New York’s Stonewall, where gay liberation started way back in the late 60’s.

Moving farther down the coast, San Diego has been a popular gay honeymoon destination since the Navy set up shop there, and it’s still loads of fun no matter where you go.

Among the places where gay men like to go to dance, drink and have fun is Pecs, voted as one of the top gay bars in San Diego.
You don’t need perfect pecs to go there, but it can’t hurt.

Urban Mo’s is another popular gay hangout.
What used to be a Hamburger Mary’s restaurant still serves burgers, and excellent cocktails, but now it’s bouncing to a gayer beat.

Lips restaurant is a garish treasure that showcases frequent drag reviews, and other extravaganzas for special occasions.

Kickers has the local reputation as the place to go in San Diego if you’re gay, in love, and want to dance your asses off.
Plus, every time you go there, the atmosphere and vibe will be different.