Thinking About a Vegetarian Wedding? 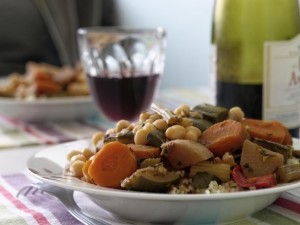 Vegetarians were known to be those people who love to eat green veggies and are against the consumption of poultry, meat and fish.
They do not want themselves to eat and consume something that was taken out from violence.
If you are one of these people who has a great love for environment or nature eventually if you are about to take vows in the church you’ll have a vegetarian wedding.

Vegetarian wedding is just one type of wedding that promotes an idea that the couple would like to share to other people.
If both bride and groom were vegetarians then it would really be a great thing to have a vegetarian wedding; they’ll have the chance to let other people understand their beliefs and way of life and those people who will be invited will be able to experience the nature of this kind of living.
Like in any other weddings which vary from culture and traditions and even religions, vegetarian wedding was a way of showing others what type of life they have, and what they believe in.

Two types of religion that promotes vegetarianism would be Hinduism and Jainism – these religions have their own reasons for promoting vegetarianism among their people.

Hinduism, on their part, has three basic reasons for promoting vegetarianism and those are the nonviolence to animals, to promote pure food diet and last reason is that eating animal meat would be harmful for the spiritual and mental development.

On the other hand, Jainism’s reasons would be most likely the same with the Hinduism’s purpose but Jainism focuses more on the violence for animals.

There are also some other religions that encourages vegetarianism but this two were the religions which really obliged their people to be vegetarians.

Having a vegetarian wedding is an brilliant way of showing welfare to animals, instead of harming or slaughtering animals for your wedding, from the wedding dress, up to your shoes, dishes and everything, you can promote the importance of animal welfare by showing everyone your way of life.

Even if your guests are not vegetarians, most likely through having this type of wedding you’ll have the opportunity to say and spread what you believe in and maybe those people who were invited will have the chance to taste the great menu – how veggies taste better than meat and through this, there is a big possibility that your guests will turn out to be vegetarians too.

Weddings can be a great way of letting other people understand someone’s culture and traditions especially those who are not even aware that there are beliefs like yours.
It’s a great thing to know that you’ll be promoting a way of life that you believe to be beneficial and great for everyone.

Lastly, having a vegetarian wedding is also a way of helping our environment in such a way that you’ll not going to harm any animal just for your consumption and benefit.
It is good to know that through this wedding there won’t be any living creature that would be harm just for the sake of celebrating your sacred vow.

Choose the Pause That Refreshes: Vegan Wines and Champagne

How to Throw a Vegan Wedding Reception Without Freaking Out

Some Wedding Gift Suggestions For That Vegan Couple