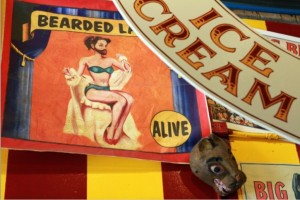 Chang and Eng Bunker are not household words today, but back in the 19th Century, the original “Siamese Twins,” conjoined twins born in the country of Thailand, which was originally known as Siam, were world-famous sideshow attractions.

The brothers, born to a Chinese father and a half-Malay, half-Chinese mother, were born on May 11, 1811 and were joined at the sternum.
They shared no internal organs, though their individual livers were attached at one end.
Although the birth of these strange twins was originally considered a harbinger of the end of the world, they made their village famous all over Siam.
Then, in 1828, a Scottish merchant named Robert Hunter brought the boys to the United States for an extended tour as headline attractions.
The brothers made their living as freak show attractions until 1839, when they left the employ of famed showman P.T. Barnum to settle down to a normal life in Wilkesboro, North Carolina.
Chang and Eng became American citizens, later adopted “Bunker” as their last name and tried to live as ordinary a life as they could.
They used their savings to buy a plantation, acquired some slaves, and left their career in show business far behind first, to become store owners, then later to become well-to-do plantation owners.

In 1834, the brothers participated in what is quite possibly the weirdest wedding in recorded history.
In April of that year, Chang married Adelaide Yates while Eng married her sister Sarah Ann Yates in a dual marriage ceremony.
The brides were two of the nine daughters of David Yates, a local farmer and part-time clergyman.
The two couples then set up housekeeping in the Bunker’s home, sleeping together in a specially constructed giant-sized bed.

Eventually, however the two wives began fighting, and dragged Chang and Eng into their conflicts, so eventually it was decided to set up two separate households just west of Mount Airey in North Carolina.

The wives stayed in their own homes and the twins alternated spending three days in each of their two households. This unusual arrangement must have worked out; the Bunkers remained married to their brides until the twins died within an hour of one another in 1874.

Despite their unusual birth defect, the Bunker brothers each managed to father large families.
Chang and Adelaide produced a total ten children, while Eng and Sarah had a total of 11 children.
All were normal except for one son and one daughter of Chang and Adelaide who were deaf-mutes.

If there has ever been a weirder marriage in all of recorded history, my researches have yet to bring it to light.